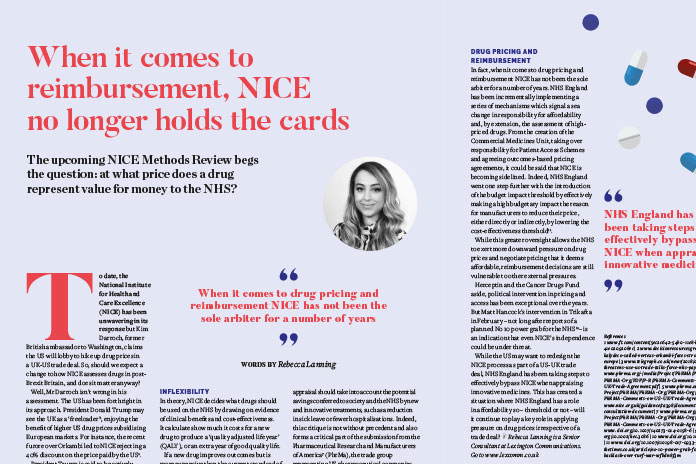 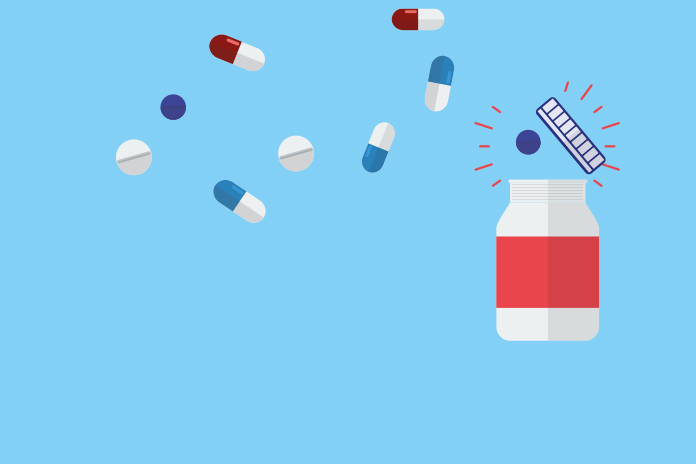 The upcoming NICE Methods Review begs the question: at what price does a drug represent value for money to the NHS? Rebecca Lanning discusses drug pricing and reimbursement.

To date, the National Institute for Health and Care Excellence (NICE) has been unwavering in its response but Kim Darroch, former British ambassador to Washington, claims the US will lobby to hike up drug prices in a UK-US trade deal. So, should we expect a change to how NICE assesses drugs in post-Brexit Britain, and does it matter anyway?

Well, Mr Darroch isn’t wrong in his assessment. The US has been forthright in its approach. President Donald Trump may see the UK as a ‘freeloader’1, enjoying the benefit of higher US drug prices subsidising European markets. For instance, the recent furore over Orkambi led to NICE rejecting a 40% discount on the price paid by the US2.

President Trump is said to be actively taking advice on how the NHS can pay more for US medicines3 and NICE’s price cap – usually beyond the reach of political interference – has been identified as a key target for US negotiators4.

However, as long as negotiators focus on the inflexibility of NICE’s cost-effectiveness threshold5, the threat to the NHS budget in a future trade deal is minimised. As the eventual approval of Orkambi – or the accelerated appraisal of Trikafta – shows, the role of NICE is changing but it isn’t due to Brexit or the demands of a foreign president.

In theory, NICE decides what drugs should be used on the NHS by drawing on evidence of clinical benefits and cost-effectiveness. It calculates how much it costs for a new drug to produce a ‘quality adjusted life year’ (QALY), or an extra year of good quality life.

If a new drug improves outcomes but is more expensive than the current standard of care, NICE calculates the increase in health and divides this by the increase in cost to determine an incremental cost effectiveness ratio (ICER). NICE’s threshold for acceptable ICERs – between £20,000 to £30,000 – is commonly known as its threshold range. To put this into context, prior to final negotiations with NHS England, the ICER for Orkambi ranged between £218,000 to £349,000 per QALY gained6.

NICE’s approach led Jeffrey Leiden, Chief Executive of Vertex, to publicly criticise the very basis of its decision-making. He also argued the appraisal should take into account the potential savings conferred to society and the NHS by new and innovative treatments, such as a reduction in sick leave or fewer hospitalisations. Indeed, this critique is not without precedent and also forms a critical part of the submission from the Pharmaceutical Research and Manufacturers of America7 (PhrMa), the trade group representing US pharmaceutical companies, to the government agency developing the US’ negotiating objectives.

But NICE has not shied away from these limitations. It is acknowledged that the QALY perpetuates health inequalities and spill over effects on productivity. Wider economic returns and social value are ignored in calculations; but NICE rarely rejects a drug on grounds of cost-effectiveness alone8. In reality, the threshold plays a far less important role in appraisal than people think because NICE often approves new drugs far above its stated range at a cost of around £45,000 per QALY9, 10.

In fact, when it comes to drug pricing and reimbursement NICE has not been the sole arbiter for a number of years. NHS England has been incrementally implementing a series of mechanisms which signal a sea change in responsibility for affordability and, by extension, the assessment of high-priced drugs. From the creation of the Commercial Medicines Unit, taking over responsibility for Patient Access Schemes and agreeing outcomes-based pricing agreements, it could be said that NICE is becoming sidelined. Indeed, NHS England went one step further with the introduction of the budget impact threshold by effectively making a high budgetary impact the reason for manufacturers to reduce their price, either directly or indirectly, by lowering the
cost-effectiveness threshold11.

While this greater oversight allows the NHS to exert more downward pressure on drug prices and negotiate pricing that it deems affordable, reimbursement decisions are still vulnerable to other external pressures.

Herceptin and the Cancer Drugs Fund aside, political intervention in pricing and access has been exceptional over the years. But Matt Hancock’s intervention in Trikafta in February – not long after reports of a planned No 10 power grab for the NHS12– is an indication that even NICE’s independence could be under threat.

While the US may want to redesign the NICE process as part of a US-UK trade deal, NHS England has been taking steps to effectively bypass NICE when appraising innovative medicines. This has created a situation where NHS England has a role in affordability so – threshold or not – will it continue to play a key role in applying pressure on drug prices irrespective of a trade deal?

Rebecca Lanning is a Senior Consultant at Lexington Communications.

Read more articles from the April issue of Pf Magazine.